I just ordered a book by Paul Hollywood. It’s only costing me £1.90 (and my reputation) but I thought you might be a bit surprised. In my defence let me say that I’m only doing it in the interests of research.

Last weekend I ran an Intro to Sourdough course for a guy called Jeff. I was a little apprehensive because I had been told by his partner that he already baked sourdough and I wondered if the course was advanced enough for him. I needn’t have worried because, although he was a great student, he had learned his baking from a Paul Hollywood book.

Jeff brought along a loaf. I can’t say it was a pretty sight – it hadn’t risen at all and it weighed like a brick. He assured me it tasted great. I took his word for it. Everything’s comparative.

He also brought along his starter which was grey and putty-like.

Anyway, we had a really good course. Jeff produced a heap of great looking bread (using my starter) and staggered enthusiastically home with it. And we exchanged starters to compare.

On Saturday evening I refreshed his starter at a ratio of 1:1:1 (starter:water:flour) by weight. 24 hours later there were just a few bubbles apparent similar to making a starter from scratch when the bacteria in the mix start producing gases before the yeast kicks in. Refreshed it at a ratio of 1:2:2. Monday it looked a little stronger so repeated 1:2:2. Tuesday similar, refreshed at 1:1:1. By Wednesday some improvement but it got a two day rest because I went down to Brum to see my 94 year old Mom:

Here she is at 11 in the morning in All Bar One lining her stomach before we got stuck into the prosecco. I’d just wheeled her around the new New Street Station. Verdict: shopping mall with platforms (if you can find them). Bound to win awards.

So, finally back home, refreshed his and my starters last night at 1:1:1. 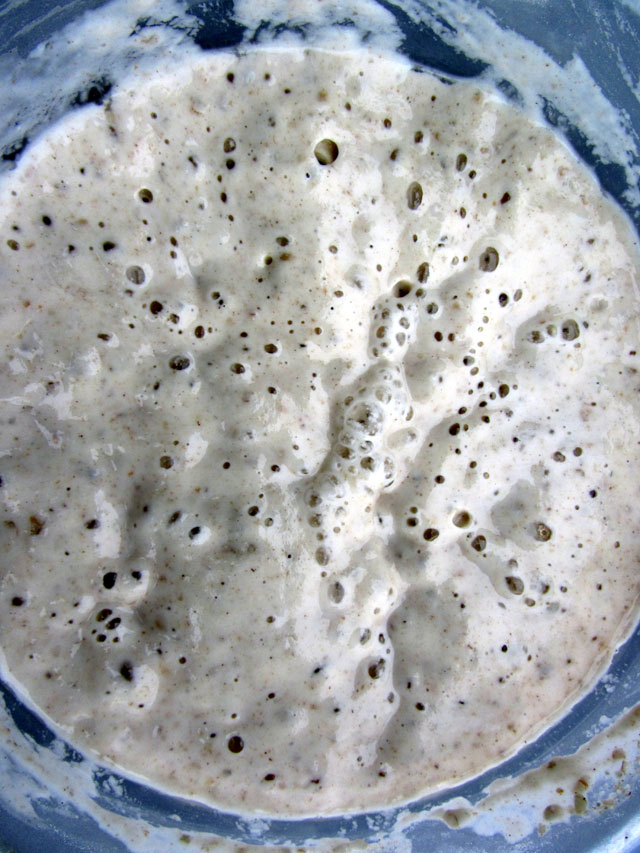 By this morning, my starter has peaked and is falling back. Jeff’s is looking very healthy and still pushing.

The moral of the story is, leave celebs to the business of entertainment and come and do a course with someone who actually understands sourdough. It’s hard to assess your own work unless you bake with someone else.

2 thoughts on “Are You Sitting Down?”