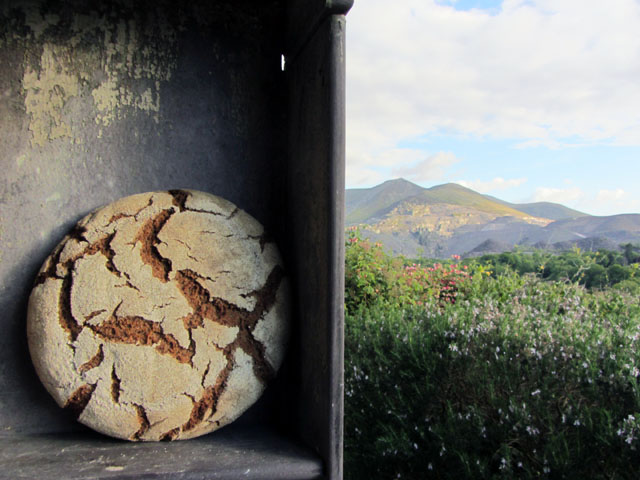 This was given to me by Nina Holm Jensen a fine Danish baker who is very generous with her recipes. She came to the first Bethesdabakin’ weekend back in 2007 and again for the fifth. She has a great talent for visualising the bread she wants to create and for blending the different flours she needs to do this.

I keep my rye starter at 100% hydration. Even though I’ve made lots of rye breads over the years it still feels a little alien to me whereas I’m totally comfortable with wheat doughs. As a rule of thumb I take the chill off the tap water I use and allow starters 24 hours to develop after refreshment.

*% of the starter weight

Make up the Final Starter 24 hours before you mix the dough.

Mix the dough in a bowl. There’s no point in kneading it much because there’s not a lot of usable gluten in rye flour so stir it around a bit, cover the bowl and give it about an hour’s fermentation (as much to let it fully hydrate as anything).

Either wet shape the dough and drop it in an oiled tin or shape it the same way as you would a wheat boule (except it will be a lot more approximate and messy) and place it seam side up in a well floured basket. Either way it will prove in three to three and a half hours.

Now, Nina says either bake for one hour at 110C and a further hour at 180C, or,  one and a half to one and three quarter hours at 175C, covering the top with foil if burning. Then turn off the oven, remove from tins if using, and return to the cooling oven for 20-30 minutes.

What I’ve started to do is to put the bread in the oven at about 250C for 15 minutes and then reduce the heat to 180C for perhaps a further 45 minutes for an 800g loaf or an hour for a 2K, followed by the 20 minutes or so in the cooling oven with the door slightly ajar.

Cool the bread totally and wrap in cling-film for at least 24 hours before using. Freezes really well and the flavours develop even in the freezer. 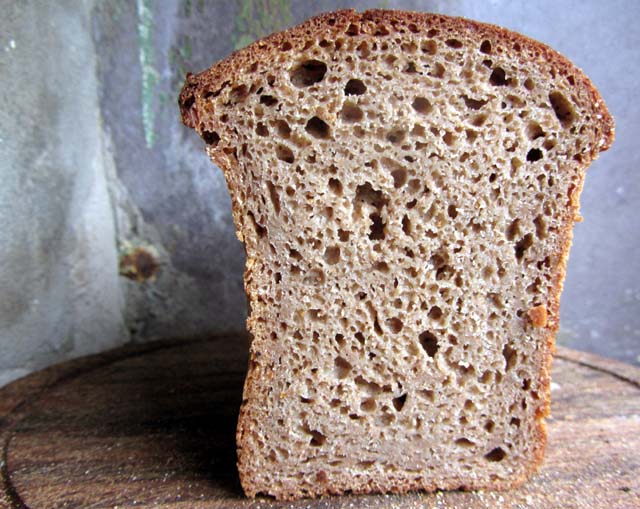