Santes (Saint) Dwynwen is the Welsh patron saint of lovers and her saint’s day is this Thursday 25 January. This is a bit weird because she spent most of her life as a nun but not as weird as the rest of the story. Back in the 5th century Dwynwen is deeply in lurve with one Maelon but her cruel father has promised her to another and forbids the relationship. Dwynwen is so distraught she prays to fall out of love with Maelon. Big flash, puff of smoke, and there stands an angel who slips her a mickey that makes her forget Maelon and turns him into a block of ice. As a consolation prize God gives her three wishes. She goes for de-icing Maelon, never to marry and for God to fulfill the hopes and dreams of true lovers. That sorted, she becomes a nun and off she goes to Llanddwyn Island off the south west corner of Anglesey where she builds a church and spends the rest of her life. Being of a practical bent, she has left behind a holy well to assist lovers in their deliberations about their future chances. 1. it contains a sacred fish whose wiggles can predict the future; 2. if the well boils, the couple are onto a winner for forthcoming love and good luck (presumably starting with a boiled fish supper).

Anyway, seeing as how God has done a good job for me and Sue in the hopes and dreams department, I thought Santes Dwynwen should have a bread dedicated to her honour:

Torth Santes Dwynwen: Given her story, I have allowed myself a few flights of fantasy. She must have had a walled garden with apricot trees espaliered against the sheltered south facing wall because it’s an apricot bread. She would definitely have had bee hives for honey and made mead for the nuns’ Christmas party, so the apricots get a soak in a splash of mead. 25% of the flour is wholemeal einkorn, an ancient form of wheat now back in vogue again and gathering claims as a healthy and easily digestible ingredient. It is shaped as a simple Celtic spiral which symbolises the roundness of round things. 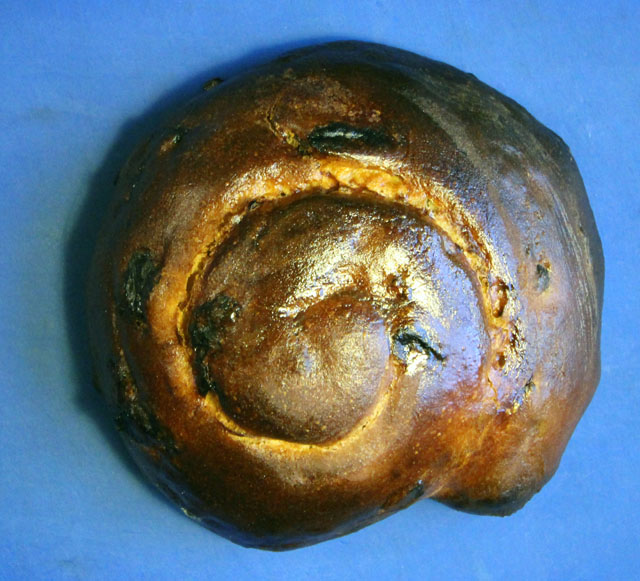 Our only claim is, it’s jolly nice for breakfast.