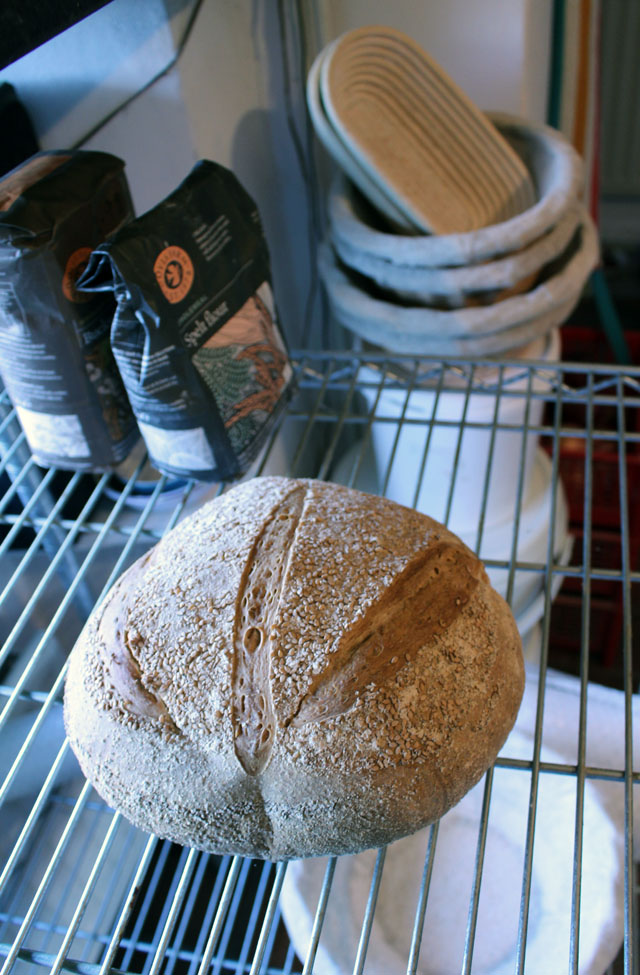 In the Sunday morning light amongst the baking debris sits a lone Pain de Campagne. So what? you may say. We’ve seen hundreds of your campagnes before. But behind this picture lies a sorry story of dough abuse.

Two events were coinciding. Bob from Ruthin had booked a sourdough course with me Friday afternoon/Saturday to be swiftly followed by Steffi’s birthday party next door in the early evening. I was to make a large Coca (sort of Spanish pizza) for the feast. Planning’s the thing.

Courses round here conclude with a pizza lunch when the loaves are out of the oven. My current pizza dough is the 80% hydration dough that sits in the fridge for 48 hours fermenting and could be used for both the pizza and the coca so on Thursday I knocked up enough for the two.

3.30 a.m. a little thought crept into my mind, I don’t remember putting the dough in the fridge. Sod it, it can wait till the morning. Friday morning put it in the fridge, prepped the coca toppings and prepared for the course.

Bob is an experienced baker but wanted to improve his loaves. He brought along his starter and for comparison we mixed one campagne with his starter and one with mine. Into the fridge overnight with the other doughs.

Saturday morning before Bob’s 9.00 a.m. start I thought I’d better give the pizza dough a turn. It gave me a turn – thin as chicken consomme. Hastily knocked up a batch of my number two pizza formula which I knew we could get away with after just a four hour fermentation.

When Bob arrived we compared the campagne doughs. Mine was twice as big as his which had hardly moved. He reckoned it might eventually come to life so we put it on one side.

Had an excellent morning’s bake and along came pizza time. Asked him to scale 3 x 200g pieces which we rounded up and put on pizza tins. Went to put the remainder back in the box for the evening’s coca – there was a lump that was obviously only about 300g left. Reweighed everything several times – I knew I’d mixed 1600g that morning. Went back to the laptop – there it was – 1200g. Little light bulb started to flicker – went into the other room – there’s a dough box on the table. We’d been scaling Bob’s sluggish campagne dough.

Balled up Bob’s beleaguered dough put it back in the box, continued as normal and on to a jolly lunch which brought  a thoroughly enjoyable course to an end.

When I was baking Steffi’s coca early evening I noticed Bob’s dough had started to move so I thought, why not? Last Chance Saloon time, give it a go. Got it in the basket and away to Steffi’s for the party. 9.00 p.m., after a night in the fridge + about 11 hours ambient fermentation half way through which it was chopped, rounded and then reassembled + 3½ hours prove, it finally went in the oven.

That’s why I thought it was worth a picture.