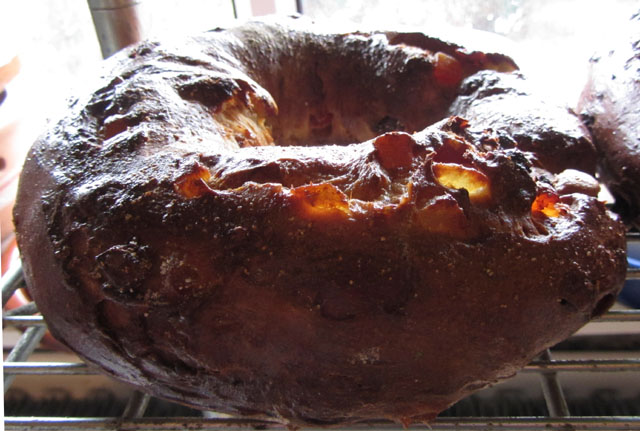 May the sun always shine through your papaya.

Anyway, couple of Tuesdays ago I get a phone call from Rick – http://www.mairsbakehouse.co.uk/. Do I think he can hand mix 100 large loaves? 60? Rick & Maggie’s Bakehouse is getting on for a mile down a seriously rutted track from the road. A lot of people would call the road a lane. Consequently they generate their own electricity by wind turbine. Problem: no wind. Secondary problem: generator fucked.

Rick hates hand mixing but he knows I do a fair amount of it and, as he has the market at Machynlleth the following day, he called me as the nearest thing he could find to  a consultant. Rick is a few years younger than me – just approaching his pension – and we have both recently been outed as diabetics. I say, I would mix 20, but 60-100? We decide he should err on the side of caution.

Ten minutes later I remember my other great talent, subversion. Phone him back. What are you doing tomorrow? Nothing – what a surprise. Why don’t you come up for lunch? So we had a really good day’s truanting. Didn’t even talk about bread – much. 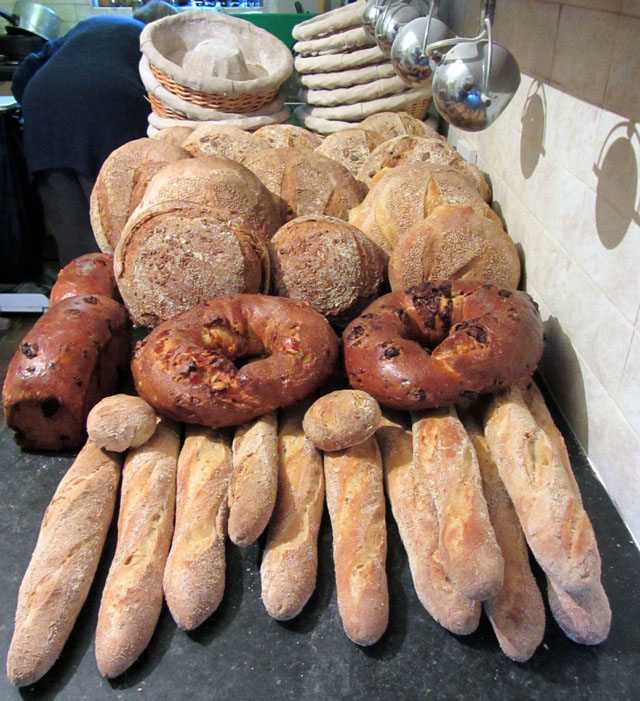 All hand mixed. I don’t do anything heroic; anything under 6K I would mix by hand rather than get the mixer dirty but the old body is not what it was so I work in multiples of between 3-4K. The brioche (3K+) was mixed in the morning because I wanted long fermentation times. The Wholemeal is only 1.5K. The 5 Seed is just over 6K so I mix it in two halves and knead them together at the end. The Campagne and the Baguettes are the same dough which totals nearly 6.5K so, again, I mix in two halves.

I hope no one still does the old “knead for at least 15 minutes” thing (unless you enjoy inflicting pain on yourself). I mix the first dough in a bowl; when it’s come together get it on the far end of the bench and give it 10 kneads. Then I mix the second dough plonk it down next to the first dough, give it 10 kneads, move on to the first dough and give it 10 kneads. Repeat with the third dough giving 10 more kneads to the second and first doughs by which time dough no. 1 is ready and either goes into a dough box for fermentation or, if it is half of a larger dough, waits until its partner is ready when the two are kneaded together and whacked in a box. Continue until all the doughs are done when, in my case, they go in the fridge overnight.

Now, if I was young and fit and had a big order (and a dough trough) …