Yes, volumetric measurement. Look at this:

First off I have to say that I have a very great respect for Paula Wolfert. But this is a brioche recipe from her Mediterranean Clay Pot Cooking. How could anyone use these measurements and get even roughly the same weight of dough twice?

Question number two: how could you convert this to grams and feel confident your measures were anywhere near what she intended?

Question number three: how could you convert the recipe to sourdough? (the only liquid is 3 tbls milk – how’s your starter going to fit in?).

Well, you know a little challenge is all that stops me from fading into oblivion (I’m not going to show you my conversion though – you have to work that out for yourself.)

She uses the dough for a recipe called Le Gatis, a brioche stuffed with Cantal & Roquefort cheeses. For a try-out I just substituted sharp Cheddar and St Agur.

I know this looks like one of Joe Firebeard’s creations before he sticks on a little head at one end and a smaller tail at the other and it miraculously becomes a tortoise but it ain’t. Half the fermented dough is rolled out and the other half is rolled into balls which are the flattened. The cheeses are spread over the round leaving a border at the edge which is brushed with egg-wash, and the flattened balls arranged loosely over the surface, with just the outside edge sealed.

I wasn’t expecting too much for a first go – I’d have liked to have rearranged the proving times. But opening the oven door after 20 minutes produced a mighty uncontrolled expletive in contrast to my normally modest, gentle, dulcet tones: 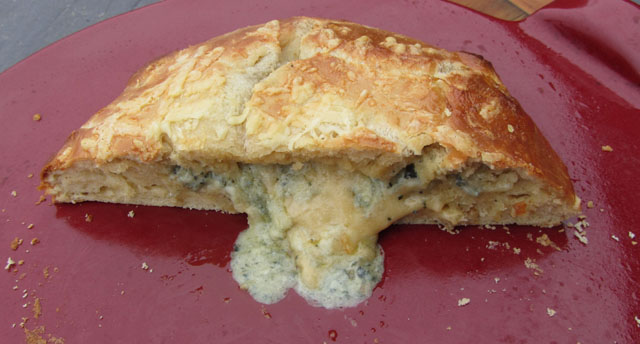 I think you can say I will be trying this again.