First off, Happy Birthday Louis Armstrong, the greatest jazz trumpeter ever, born this day 1900. So we are working our way through the Hot Fives & Sevens – the bakery is jumping while I knock out a variety of bread and a bunch of baguettes for a wedding Gert is doing tomorrow. The amazing thing is that you have the astonishing Earl Hines on a lot of the tracks so not just great playing but you can hear incredible musical innovation happening before your very ears. I sometimes listen to some of his solos and wonder what the hell they made of those broken, angular chord progressions in 1926 …

Second, Broa. This is at least my third attempt to get it right. Every few years I have another bash – I WILL succeed!!!

When I was in Paris a few weeks back I scoured the shelves for interesting bread books. I found a bilingual Spanish book and a bilingual German book and pounced on both only to find they were very middle-of-road boring. I nearly overlooked this newish Eric book (pity I didn’t). I bought it because it looked different to your usual French bread book like whoever planned it had looked at a few non-French books and, although it’s clearly aimed at beginners, most of the recipes use Eric’s liquid starter. Sadly, when I looked more closely (after being parted from my cash) I noticed they also use commercial yeast.

Anyway, it has an international section! Portugal = Broa. So I made some (omitting the yeast) and it was OK but pretty bland. However, my understanding is that two things about Broa is that boiling water is poured over the cornmeal and that the less wheat flour you use the more authentic it gets. No boiling water in Eric’s version and 50% wheat flour.

So it’s been driving me mad trying to get it right. One version went straight in the bin without even tasting. Now I think I’ve got the ingredients and proportions right but I’m not convinced about the point at which to bake. 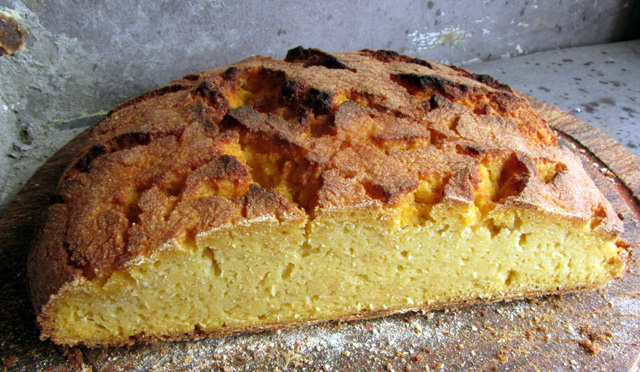 As it’s basically cornmeal paste held together with a bit of wheat starter, it’s a little fragile. No point in two rises but I’m not sure I’ve got the timing right. This proved for four hours. Then again, is it worth the effort?

Fifteen baguettes in the back row for canapes; a Spiced Raisin loaf in the middle; and, left to right, 5 Seed with Spelt, Pain Nicoise, Fig & Walnut Wholemeal, Cistercian and a fabulous Roast Garlic & Parmesan loaf.