I’ve always used white starter to leaven my wholemeal – not as policy but because I can’t be bothered to keep a wholemeal starter. Anyway, the 11% or so white flour probably makes the loaf a bit lighter.

I inherited the remains of a number of different flours after the Bethesdabakin’5 event that Anne & Andy Parry had kindly brought up from their Felin Ganol Watermill down in Ceredigion (www.felinganol.co.uk) and I’ve been working my way through the wholemeals in the past few weeks.

These breads were made with their regular wholemeal which, if I understand correctly, is a mixture of grains blended by the grain merchant to maintain a standard gluten content specially for small millers. That’s about the same rise as I would expect to get from my usual flour, Doves.

Then I started to use a flour called Tybalt, an organic wheat grown by Aberystwyth University. This had noticeably less lift but great flavour (no photos I’m afraid). Personally I’m not concerned when a loaf spreads – flavour and texture are the thing. But I have to worry about customers whose expectations might be different.

Then I moved on to Dyffryn, another local flour:

I was totally taken aback by the coarseness of the flour (the diameter of the circle is only just over five inches). That’s a bit misleading because the whole ranged between very fine and very coarse and I’m not sure if it would normally be bolted to produce a single grade.

Problem was, it produced a very flat loaf: 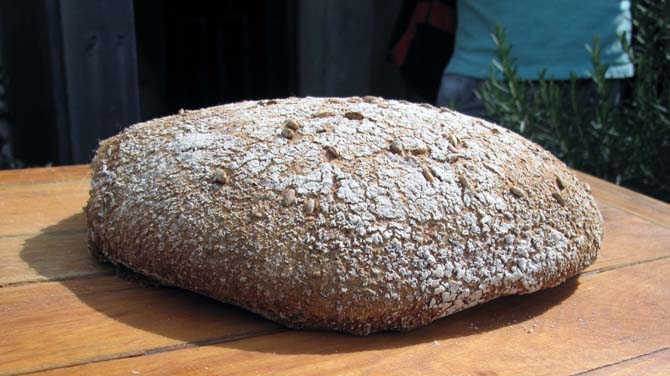 – and I did start to get worried about customer response.

I didn’t want to increase the starter because even though it would probably have helped the rise it would have increased the proportion of white flour in the dough.

The only solution I could think of, even though I couldn’t really understand the logic of it, was to use part of the wholemeal and water from the dough in a final starter refreshment which was doubled from the original and contained only wholemeal flour. 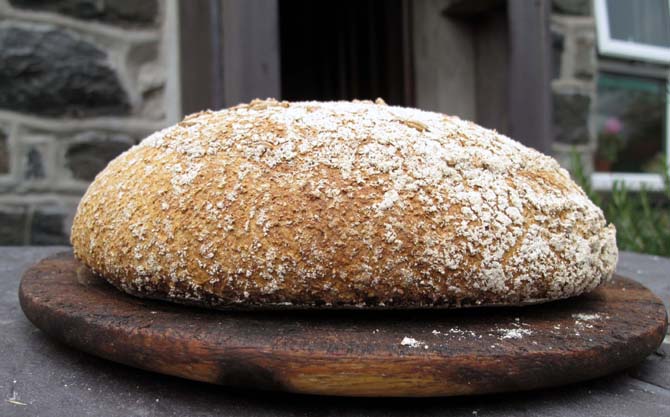 That will do me. That’s as good as bread gets – real depth of flavour.

My only problem now is how to get a regular supply of Felin Ganol flour.