All of the bread formulas are presented in a standard way. I developed a system of spreadsheets shortly after I started baking for sale to save my own sanity! Work schedules, calculations and bread orders can get a bit complicated using pencil and paper especially for bakers of little brain.

The standard American way is to present the overall bread formula with the flour and water weights in the starter included, and to talk about the proportion of prefermented flour in the formula. Breadbakers Guild of America has done a lot of work on this, but for me, it’s a little overcomplicated.

Inevitably this way of doing things started to creep across the Atlantic so, several years ago, I consulted the great Dan Lepard and this is what he said:

“The common practice in Europe is to describe all ingredients as a percentage of the flour weight. So you might say to a baker, “make up a batch of dough with 10kg flour, then add 30% dough leaven, 2.5% salt, and 68% water”. I have never, on the job, encountered percentages expressed any other way. But on the internet……” 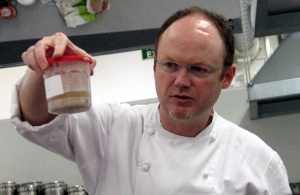 I have always treated the starter as an ingredient in its own right and included it in the formula. Also I do not use terms such as levain, mother, etc because I think it is confusing. When you see “starter” in a formula it means refreshed, fully active starter.

Unless otherwise stated, starters are at 100% hydration (equal weights of flour and water).