Once upon a time we used to bake on Thursdays and Fridays every week knocking out around 140 loaves in the two days.

These days this is a pretty typical bake day for me. The poor old sod only bakes for customers about once a month now (and he had August off as well). Yesterday, Wednesday, I mixed the doughs – except for the ryes – and they went in the fridge overnight. Wednesday morning I did the prepping which mainly consisted of roasting, cooling and pureeing a heap of butternut squash, clearing the kitchen and sorting out my ingredients.

The Campagne (including the Baguette dough) and the Butternut Squash went into the mixer, the other two hand mixed. 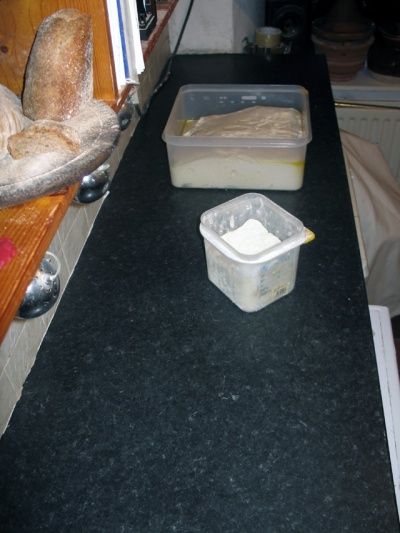 The dough is scaled at 940g (which, through evaporation, will come down to 800g when baked), and gently preshaped and laid out in order on the bench. 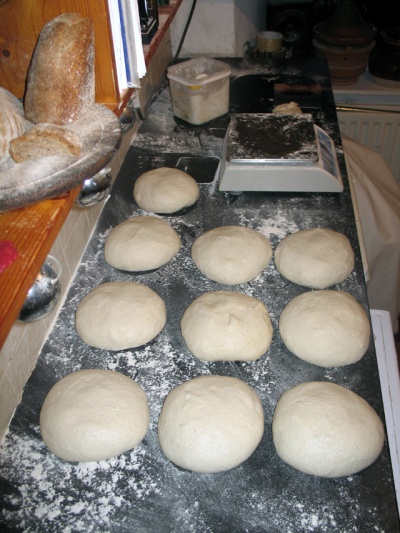 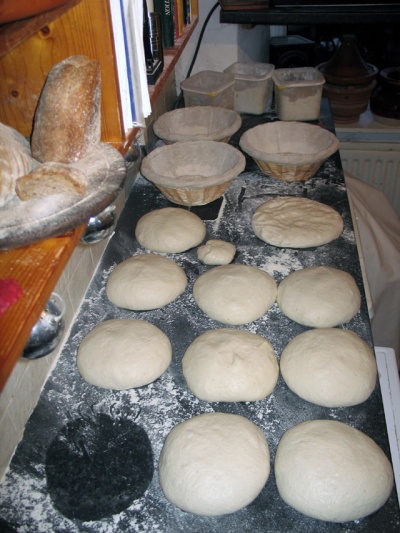 Starting with the first to be preshaped, because it has been resting the longest, the doughs are shaped and placed seamside up in proving baskets that have been floured using rye. I also put a sprinkling of sesame seeds in the baskets for Campagnes. Note the small piece of dough – Phoebe the dog is my best customer – she must have her mini- baguette. 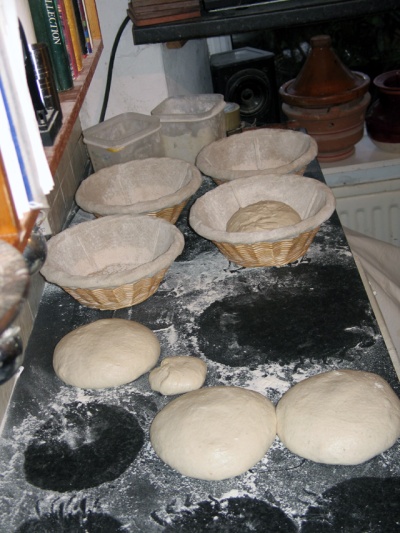 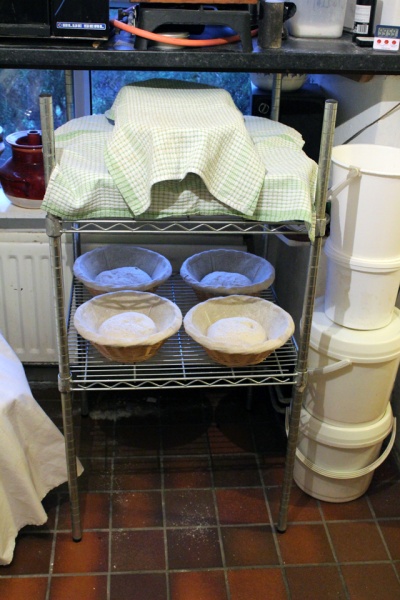 The baskets are stacked and covered and left to prove for 3½ hours.

By 8.00 a.m. my second 10 doughs are in baskets and I sneak in my ryes. Apart from making great bread, rye is useful because it can be mixed and in the oven within 3½- 4 hours which means they can be slipped into the bake schedule without overnight fermentation – handy when you have limited fridge space.

Rye starters are usually refreshed 24 hours before mixing. This one was in a particularly lively mood. The mark on the bowl shows how high it rose before falling back. This is a very wet dough mixed by hand – no kneading because rye gluten is weak and can’t be developed by stretching. Just a short period of fermentation in the mixing bowl. This one was nice and fluffy within an hour.

Very different technique for shaping wet, heavy ryes. Wet hands, wet dough scraper, wet bowl on the scales, and, for a larger mix, wet work surface, bowl of water in attendance. Note the coriander seeds scattered in the base of the tins (little taste bombs when you bite into one).

The dough is scooped into the bowl on the scales, then picked up with wet hands and squeezed to roughly the shape of the tin, dropped into the tin and pressed down gently.

When they’re all in the tins the surface of the dough is smoothed with a wet spatula.

The trouble with ryes is sometimes they are too quick. It’s entirely my fault because all the signs were there: the liveliness of the starter, the fluffiness of the dough after just a short fermentation. After only an hour in the tins the dough was climbing out. When they get to this stage there’s a danger of collapse with the lack of gluten to support the dough. Problem is, they are in a queue and there’s another two hours before there’s any oven space. I crossed my fingers and shoved them in the fridge (quite difficult that).

Back to the wheat doughs:

10.00 a.m. on with the ovens set to 210C. Heavy black steel trays for the big oven. In the background the ryes and brioches covered and proving. In the foreground the next batch of wheat doughs. 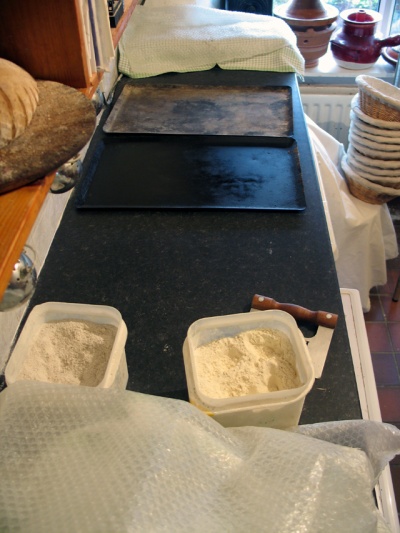 The doughs are tipped out onto rye floured trays three to a sheet.

Two to a tray for my domestic oven – one Campagne, three Classic Sourdough. Into the oven for 50 minutes.

By 11.30 a.m. the first load of Campagnes are out and crackling on the cooling tower. Note Phoebe’s mini-baguette came out round this week. Shape is the least of her worries. There are 28 large and 2 small loaves which, at 10 per bake, means I get away with a neat 3 bakes of full loads. Usually it would be 31 and I’d have to do an extra bake. 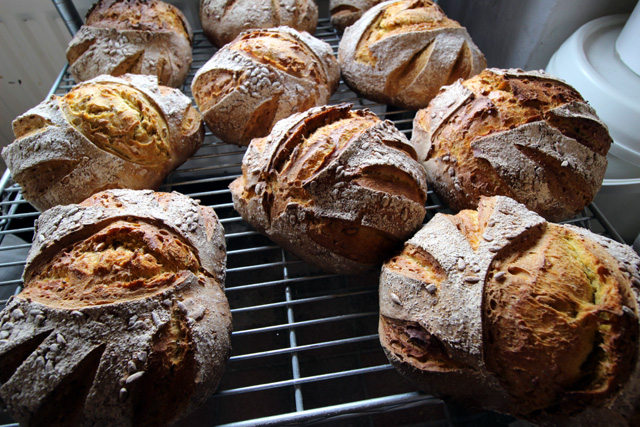 The main breads are out of the oven by 1.30 p.m. Turn up the heat to 250C. The Ryes have survived about two hours in the fridge and are more than ready for that initial blast of oven heat. Weird and wonderful stuff rye. I bake them at 250C for 10-15 minutes, reduce the heat to 180C for about 45 minutes, turn the oven off, take the loaves out of the tins and return them to the oven with the door slightly ajar for a final 20 minutes. 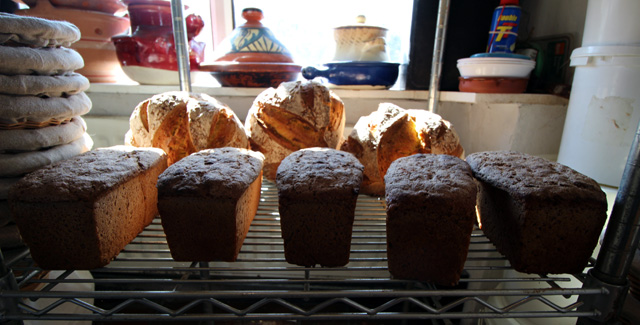 Meanwhile the Baguettes have been scaled and shaped and proved for a couple of hours. So, once the Ryes are out of the cooling oven, the heat is wound back up to 250C. 15 Baguettes is three trays which have to be rotated during the 20 minutes or so in the oven to brown them evenly.

Finally, the Brioche Provencale, stuffed full of crystalised fruits, given a brushing of egg wash and a sprinkling of poncey pearl sugar nibs. 40 minutes at 180C.

Breakfast was slotted in during a lull about 10.00 a.m. Lunch, at about 1.30 p.m., was comparatively leisurely if you don’t mind being summoned back to the kitchen by the timer. Finally got into the bath about 3.00 p.m. while Sue was bagging up, labeling and arranging the order for collection.

Up again at 6.00 a.m. and off to Brum for my Mother’s 97th birthday lunch. Even remembered to take the Brioche.

Not looking too bad for 97 and what an appetite!

She sent you a message. She said, “Michael was a lovely baby and has always been a good boy to me. So I think, now I can’t look after him any more, it would be nice if you made a little donation so he can keep his bread site going just as a favour to me. Good night and God Bless.” 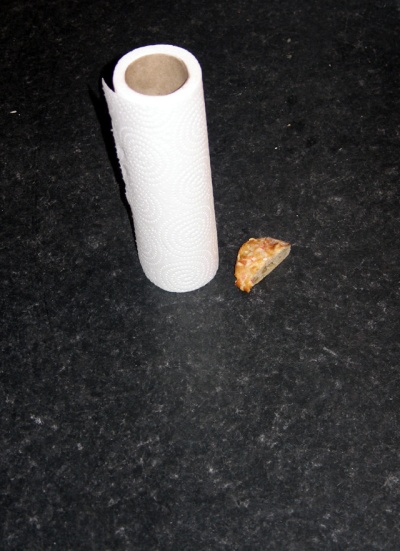